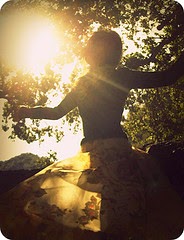 Before I had kids I was a teacher. I had hobbies. I was a musician. I was a size four (face palm). Don’t get me wrong – I wouldn’t trade my mommy badge for anything. But there is a learning curve when you step out of one life and into another. I was thrilled to be crowned “Mommy.” But it was more than just a change in title. It was an entirely new role in the universe.
A dear friend stopped by my house a few weeks after I had my fourth baby. She brought me groceries since I hadn’t been able to get out to the store for awhile. She sweetly asked me how I was adjusting to having four kids ages four and under. I burst into tears. We stood in the living room briefly and I cried while she hugged me and prayed for me. In that 60-second period of respite the two toddlers quickly emptied a bathtub full of water onto the bathroom floor. No time to feel sorry for myself. No time to even catch my breath between chaotic moments. I sent one toddler to the living room so he wouldn’t slip only to find him peeing on the carpet five seconds later. I quickly dressed him, but he got back into the bathroom while I was cleaning up pee and his brother dumped the rest of the contents of the tub on his fresh dry clothes. I thought about my friend’s question. How was I doing? My sanity was crumbling. I needed an anchor. I didn’t know what I was doing or who I even was anymore.
Thankfully the gospel doesn’t just tell us about Jesus. It tells us about ourselves. The first step toward being a gospel-centered mom is to recognize who we are in Christ. Unfortunately we allow forces other than the gospel to shape our identity as moms.
The Wall Street Journal recently printed an article stating that America’s rate of replacement has gotten so low it could have a negative economic impact in the future. Society doesn’t want the quiver-full of arrows or the olive shoots around the table (Psalm 127:5, 128:3). Society wants freedom and instant gratification. What does that say about moms? They are encumbered. They are being held back. If the world could have peeked into my life at that moment when things were falling apart it would have shook it’s head and said, “Why would you ever choose such a life? What benefit could you possibly be gaining from that?”
An article written by a woman named Amy Glass recently went viral on the internet. In it she sums up society’s view of motherhood perfectly: “Having kids and getting married aren’t accomplishments. They are actually super easy tasks. Literally anyone can do them. They are, by definition, average. And here’s the thing – why on earth are we settling for average? If women can do anything, why are we still content with applauding them for doing nothing?” Nothing. Wow. That’s what the world thinks of what you do every day.
Some moms can huddle up in their Christian circles and easily shake off the negativity from society. But there’s an enemy much closer to home: other moms. Yes, even Christian moms. Those who should be the biggest source of encouragement are often the very ones who bring out our insecurities, pride, jealousy, coveting, and comparing.
But let’s be honest – your toughest critic is yourself. You are your most merciless accuser and your strictest judge. No one knows better than you do how precious your children are. With the overwhelming joy and thankfulness creeps in a feeling of guilt. You don’t want to mess it up.
There is only one thing that can silence the anti-gospel forces that shape our mom identity and that’s the gospel. The gospel tells us that our identity is in the very person of Christ Himself. At the end of the day when I fall into bed at night and come before the Father in prayer, one of my first thoughts is, “So…how did I do today?” I expect God to pull out my list of accomplishments and study it with a furrowed brow. “Hmm…” would come the disappointed reply. But He doesn’t do that. When He looks at me He sees Jesus’ list. How is that possible? Jesus traded lists with me. He took my list of sins and failures and gave me His perfect record. Our holy God would accept nothing less. If God does not grade me based on my personal standards, then why should I?
I don’t know about you but that brings a huge sigh of relief to this stressed out mommy soul. What pressures do you feel as a mom? How would you have described yourself before you were “mom?” How do you think your current role is viewed by people in your life?

8 thoughts on “The Mommy Identity Crisis”